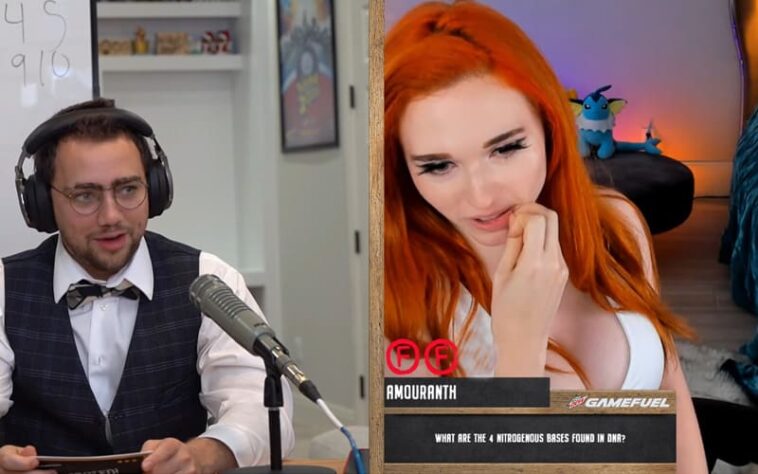 Amouranth, AKA Kaitlyn Siragusa, a super popular Twitch streamer was recently caught blatantly cheating during a game show she was a contestant on and her fans are furious that she won’t admit it.

During the game show she was asked:

What are the 4 Nitrogenous bases found in DNA?

After a few seconds she starts talking about how she remembers something from school about “Adenine”,  and then she starts jabbering on about a “thigh”; being in there somewhere too.

The clip is hilarious and so obvious that she has no idea but is getting the info from somewhere.

Then, even more hilariously, she starts saying she thinks that there is a “Guac” somewhere in there.  Seriously, a “Guac”, as in guacamole?

Then she says, something along the lines of , oh yeah, there’s a “cyst” in there too.  But then says she can’t remember what any of these words end with.  WTH is she talking about?

She seriously starts to try to sing this so called song by saying “Guac, guac. guac”.. The host slams her by saying

What kind of elementary school did you go to?

Then she somehow realizes she talking about guanine, not freaking guacamole!

Fans are not buying this crap. They are savagely calling her out on it.

Others love the song she tried to sing…Definitely a classic!

She should seriously just stick to her Hot Tub Twitch stream and leave the science to others, or at least learn how to cheat better.

Watch the clip for yourself: