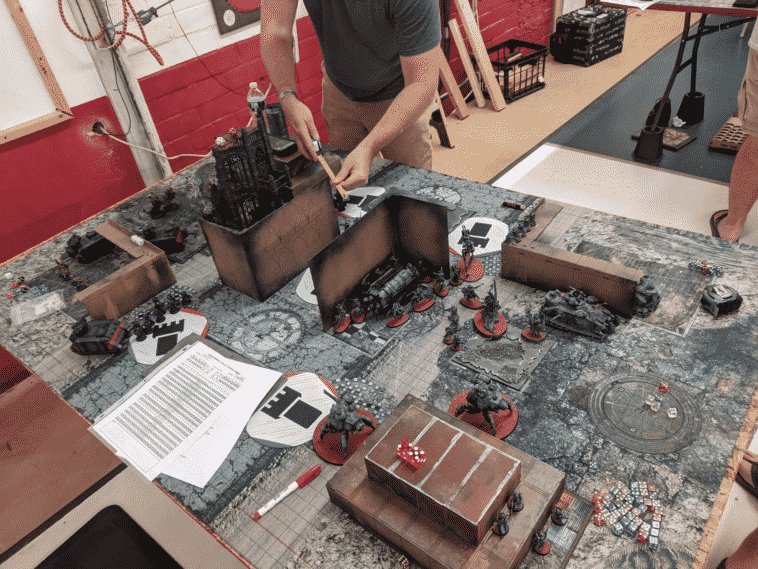 This weekend I was feeling depressed, as I usually do, so my parents wanted to take me on a mini road trip. I initially didn’t want to leave the comforts of my home, as I usually do, but I definitely would have regretted not leaving, as the main destination of the trip was worth going to.

My parents suggested that I find a game store in the city we going to: Greenville. I found a few, but I ended up going to one called The Red Barn. The name sounded familiar to me; I remembered one of my fencing instructors (yes I fence; it is awesome and you should try it out once Covid ends; I may do another article on it later) owned a game store around this area.

I entered The Red Barn, and saw that there was fencing equipment in there. It suddenly hit me, that the building that I was currently in was both a gaming store and a fencing studio. My old fencing instructor, Blake, saw me and immediately recognized me. We greeted each other and he showed me around the building.

Blake invited me to play Warhammer 40,000, which I knew nearly nothing about aside from that it was a sci-fi, tactical war game that could be scaled with power levels given to different units (and also that it was very expensive). I was told that the game just received a new addition, which was news to me, as I don’t follow Warhammer at all.

I read through the “rules” part of the new core rulebook, and got a general gist of how the game worked. Blake told me to just choose a faction to be “the one” I would use, and not worry about stats or play style. So I ended up choosing one, but this process was aggravating to a competitively minded person who also likes to try breaking games.

In the end, I mostly watched the other people that were there play, so I never got to see the capabilities of the faction I picked. I didn’t know how to end this article for two weeks until Blake invited me up to his game store to be his teammate for a Warhammer tournament.

I had bought a box from him containing everything needed to play, but I haven’t even cracked it open yet. My parents convinced me to go in the end, but I was kinda nervous.

I spent most of my time spectating again, but I was able to learn a lot more about the flow of the game. I wasn’t able to spectate Blake during round one, as he sat out due to an odd number of participants. He joined in round 2, where he absolutely wrecked his opponent.

During the round, Blake was able to explain some of his thought proccesses concerning decisions he made. In between rounds, I got to hear him tell stories of his epic Warhammer victories and comebacks. He also showed me the book that he wanted me to use to build my army: the Space Marines Codex.

About half the book was lore concerning the Warhammer backstory, but the latter half was full of stats and abilities surrounding the faction that he wanted me to play. There were so many different miniatures, weapons, leader abilities, and subfactions, that I am honestly surprised that there are many other factions, which I expect to have as many options as the Space Marines have.

This was the type of strategy that I wanted from a game like Warhammer, with lots of pregame strategy. It feels like a CCG, in that there is just a ridiculous amount of options that one can have. I will probably be spending hours making notes and trying to find synergies within the faction to build my army around.

I ended up having to go leave the tournament before round 3 started, because my dad and I had to head home, but I am really excited to come back, build an army, and start training in my Warhammer skills with Blake!